Book this tour
The Mullet peninsula is surrounded by Broadhaven Bay and Blacksod Bay to the east and the Atlantic Ocean to the west. The result is a wind-swept and treeless landscape where you can literally see for miles. There are so many things to see and stories to tell that you will be amazed that such a small area can hold so much history. No matter where you go, the sea is never far away and the drama of the crashing waves will enthral you.
A half day tour with a days worth of features and fun.

Featured on this tour 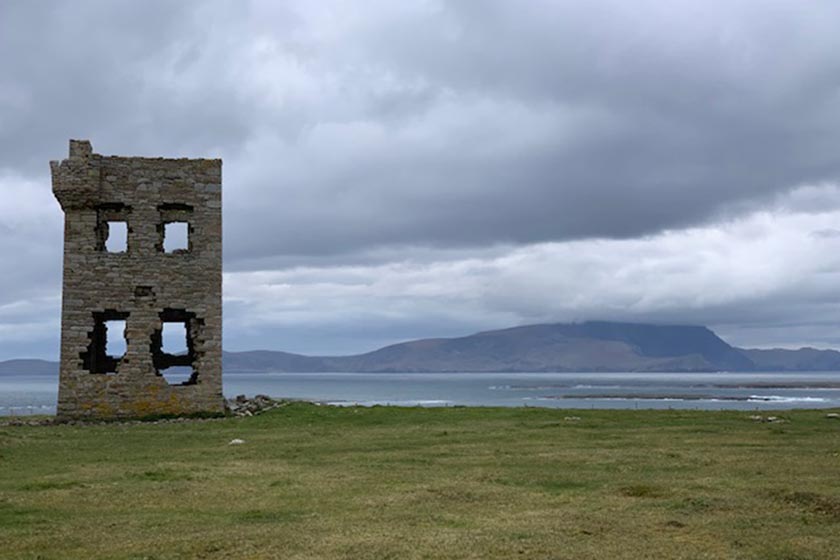 When the British occupied Ireland there was always a fear that the Irish would support a French invasion. Indeed, the French did come to support a failed rebellion in 1798. In preparation for an invasion, the British created an early warning system of towers around the Irish coast in the early 1800’s.  A good example survives and overlooks the beautiful beach at Glosh. 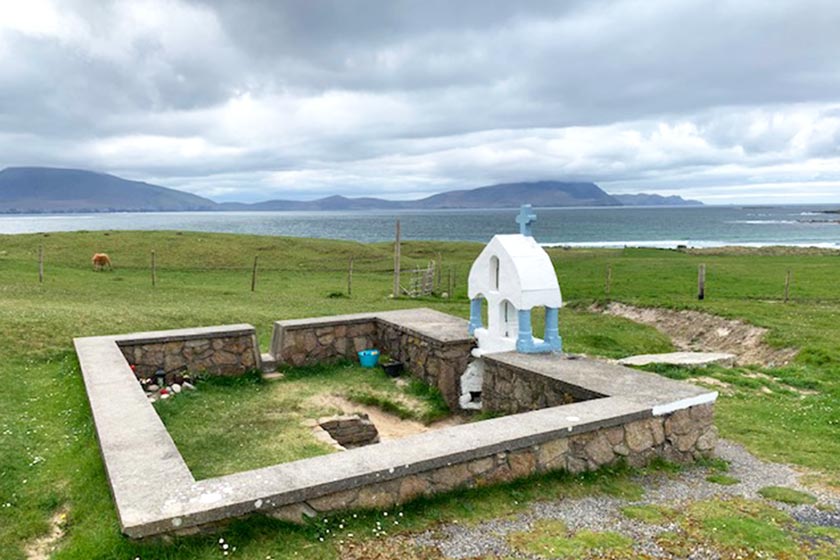 This 6th century saint wanted to dissuade a suitor from following her so she plucked out her eyes and threw them on the ground. After the horrified suitor departed a spring arose where her eyes had fallen.  When she bathed her sockets in the spring water she recovered her eyesight. We will visit the holy well and the ruins of the 12th century church built by her followers. 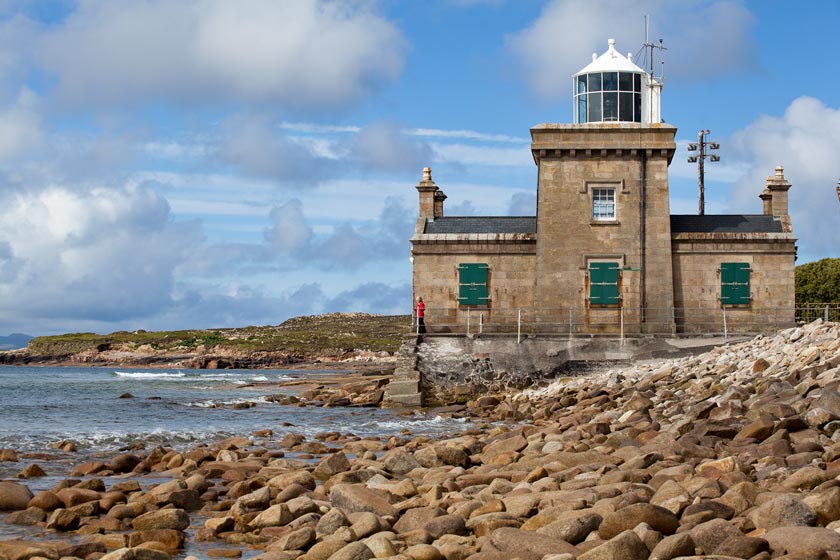 Belmullet peninsula has four lighthouses. We will encounter one on the southern tip of the peninsula.  Build of local granite this is the only square lighthouse in Ireland. It was a weather forecast from this lighthouse on 3rd June 1944 that caused the postponement of the D-Day landings in Normandy. The view south across the bay to Achill Island is stunning and constantly changing. 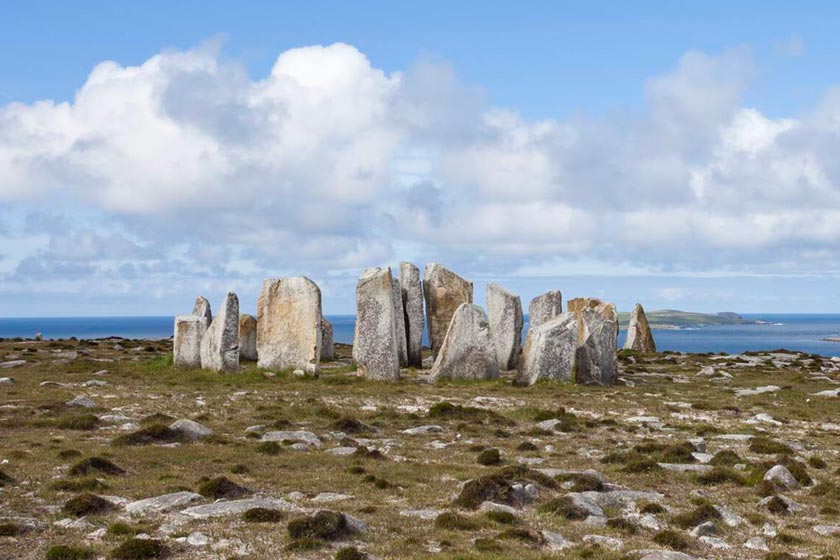 To celebrate the discovery of the Ceide Fields the Mayo 5000 committee commissioned the Tír Sáile (salty land) Sculpture Trail across north Mayo.  This consisted of fifteen outdoor art installations created by twelve artists from Ireland and abroad. We will visit Deirbhile’s Twist, a series of standing stones overlooking the Atlantic Ocean created by Michael Bulfin.  Michael uses local granite to create a fibonacci sequence of stones in a spiral. 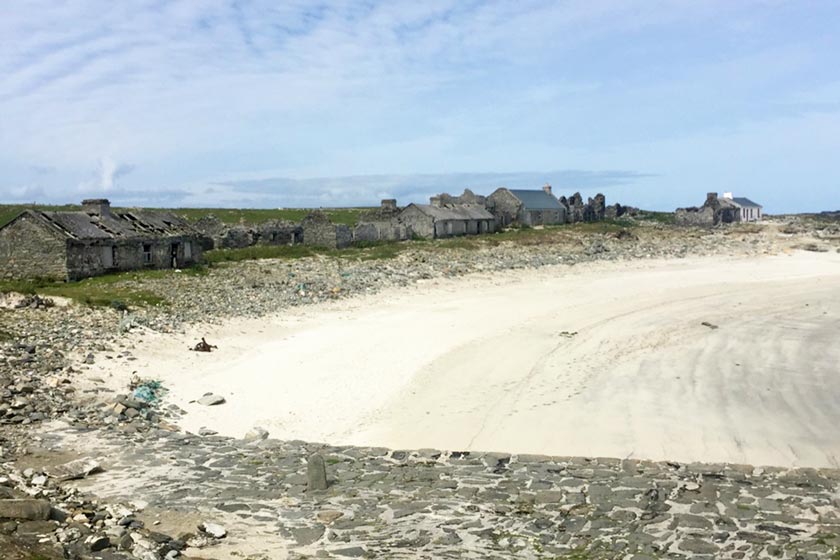 We will have a view of these two islands located off the coast of the Belmullet Peninsula.  Life was hard for the occupants of the island who survived by subsistence farming and fishing.  In October 1927 a fleet of boats was fishing when the weather changed dramatically.  Many spotted the change and returned to port but a number did not and ten of them drowned. The spirit of the islanders was broken and the islands were evacuated in the 1930’s. 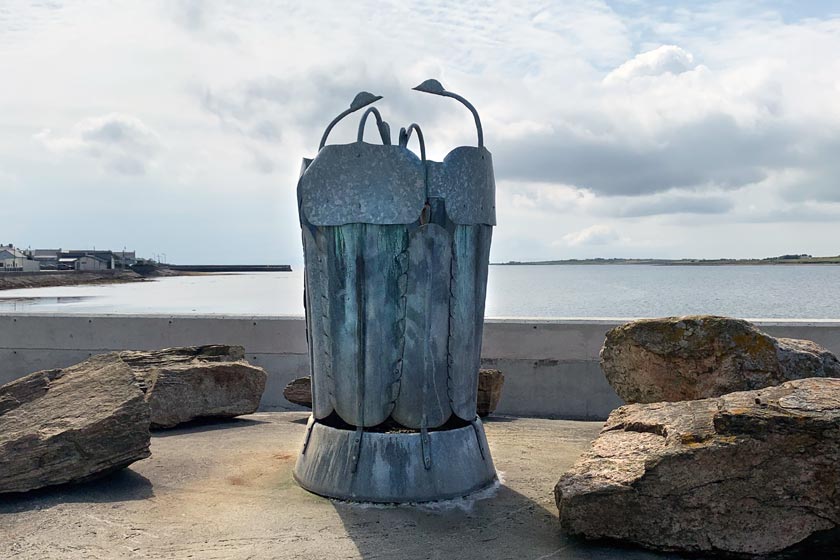 The Children of Lir is an Irish legend which tells the story of an evil stepmother who, jealous of their father’s love turns his children into swans.  The spell condemns them to spend 300 years on each of three lonely locations the last of which was Inis Glóra off the coast of the Belmullet Peninsula.  Access to the island is difficult but we can see the island from Cross Abbey and there is a sculpture close to Belmullet which recalls the legend.
Book this tour

Professionally guided tour by Neal Doherty in a top spec Land Rover Discovery classified as a Limo. Expect an interesting and entertaining tour with lots of stories, history and anecdotes that you will remember and take home to your family and friends. Our tours are designated tours but if you have some subject or area in which you are particularly interested please let me know and I will tailor the tour to your needs. 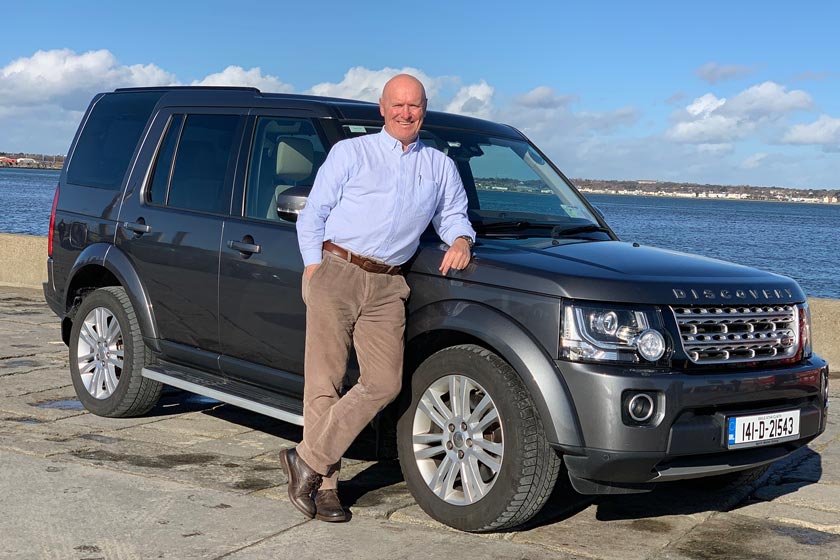